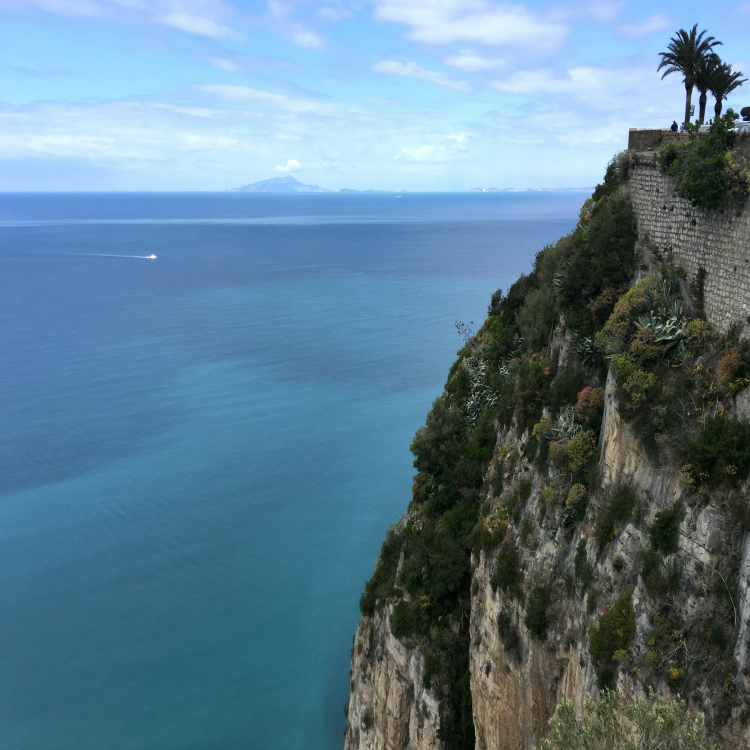 Just last week we went along the stunning Amalfi coast and are keen to share these 10 amazing views we took and the tips we picked up along the way! As soon as you hit the coast road, with Naples airport left behind, another world appears and opens out in front of you! The drive, it has to be said, is not for the faint hearted especially when you have an enthusiastic, fast but impatient Italian driver at the wheel!! But somehow this just adds to the experience of it all! So TIP 1. distract yourself with the views and don’t try to comprehend how that coach is going to squeeze past you on the narrow road – it’ll be fine! 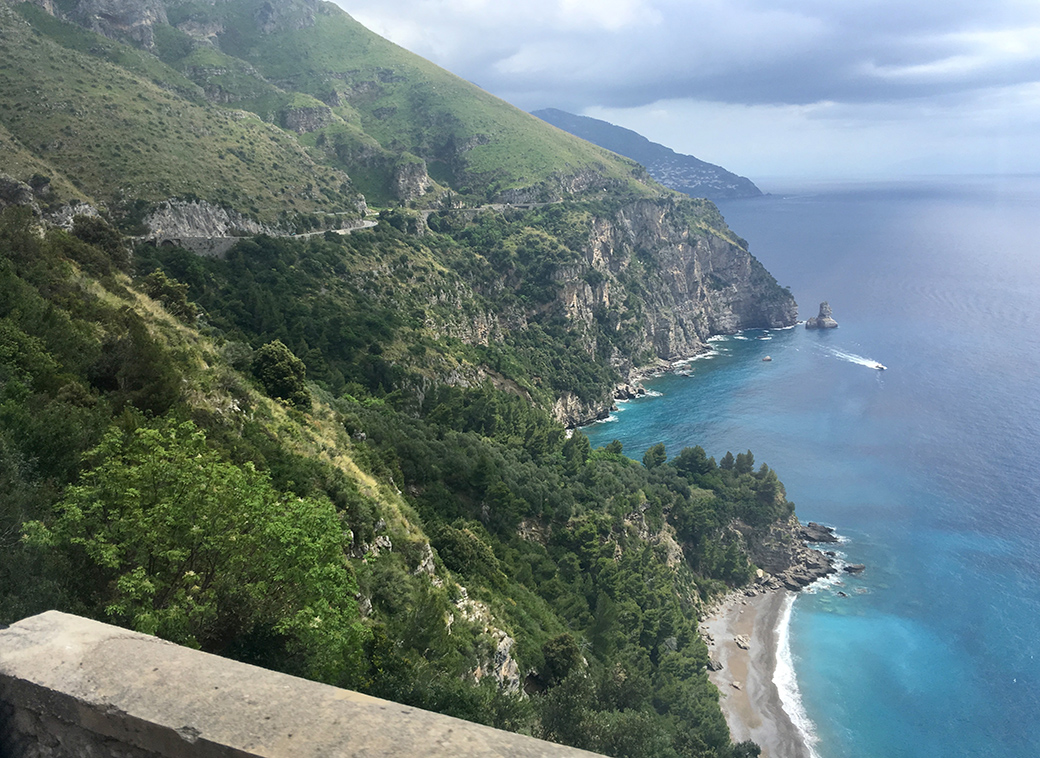 With every twist and turn of the hairpin bends another incredible panorama unfolds – lush greenery, sheer drops, rock formations, glimpses of hidden villas, emerald, turquoise and cobalt water – all so picture postcard! The view, in many places, just lets you glimpse into a secret life – as below there is a treasure trove of bays and luxurious properties that can only be reached by boat and invitation only, no doubt! TIP 2. to see all from a different perspective there are taxi boats that will ferry you to all the famous stops along this coastline but they only run May to September, hence why we took the bus! 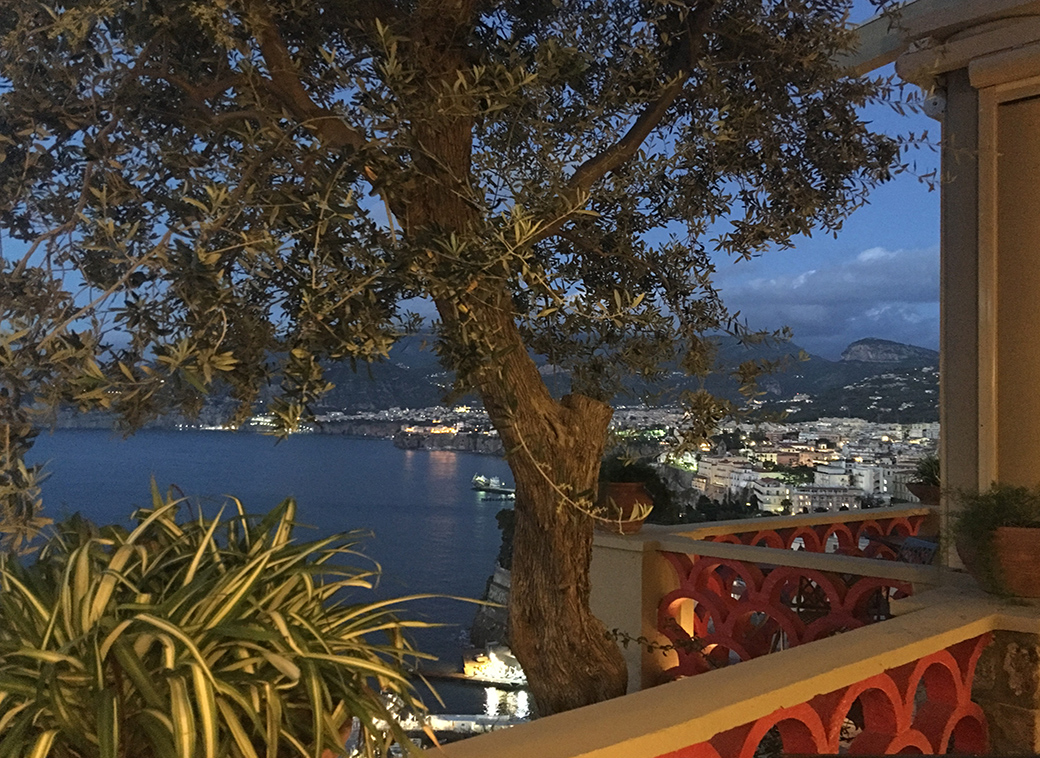 Hotels, bars and restaurants are carved into the rock and have amazing terraces hanging out over the views right along the coast – by day inspiring and exhilarating vistas over the bay of Naples along with the islands of Capri and Ischia that sit just off shore … by night magical twinkling lights dancing from the waters edge, climbing high to reveal small pockets of tiny villages perched in the gods up above! TIP 3. only one hour from Naples and 2 to 3 hours from Rome we find Sorrento a great base from which to explore this coastline and it’s more than feasible to combine a city and beach holiday in one … we stayed at the Minerva Hotel which had amazing terraces directly opposite Naples and Vesuvius, so the sights were incredible, and an absolute joy to sit out on for breakfast and drinks in the evening  … also there is a rooftop pool with quirky private areas to lounge out in the sun – again with spectacular views!

It is a feat as to how this winding coastal road came to be as it cruises through, around and over the menacing rock that stands proud and strong! Every view is unique as the formations of rock take on a life of their own with some areas baron, others rich with flora … the jagged rock profile rising high and dropping dramatically either side of us were beautifully daunting! TIP 4. when in Sorrento there are two ways to get down to the shoreline and ferries – walk down many steep steps and following the hairpin road down to the end OR take the 1 Euro lift which can be found just off of the main Piazza Tasso! We found the lift after a walk down and expensive taxi fare back up!! 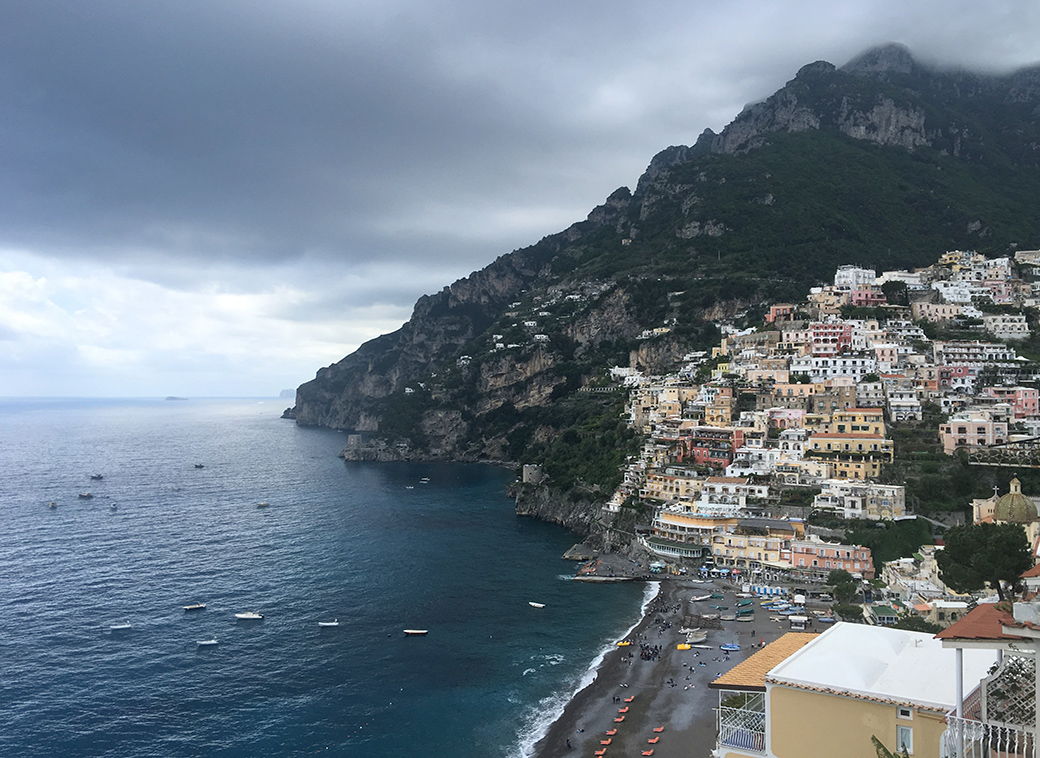 Positano is one of our favourite stops along this coastline and has been described a thousand times as a little jewel of a village clustered around a sheer bay which is exactly what it is! Black volcanic sand set against the yellows, pinks and oranges of the buildings, delicious fresh fish restaurants and by night candle lit and sparkling – it’s a gem! TIP 5. if you are on the bus from Sorrento don’t get off at the first stop for Positano – stay on until the bus has gone around the bay and dropped down slightly – this will save your legs from the full descent down and back up again! TIP 6. Amalfi is not to be missed either and not much further along after Positano … so if you do go and the day is clear then climb even higher to take in heavenly Ravello too – panoramas to behold! 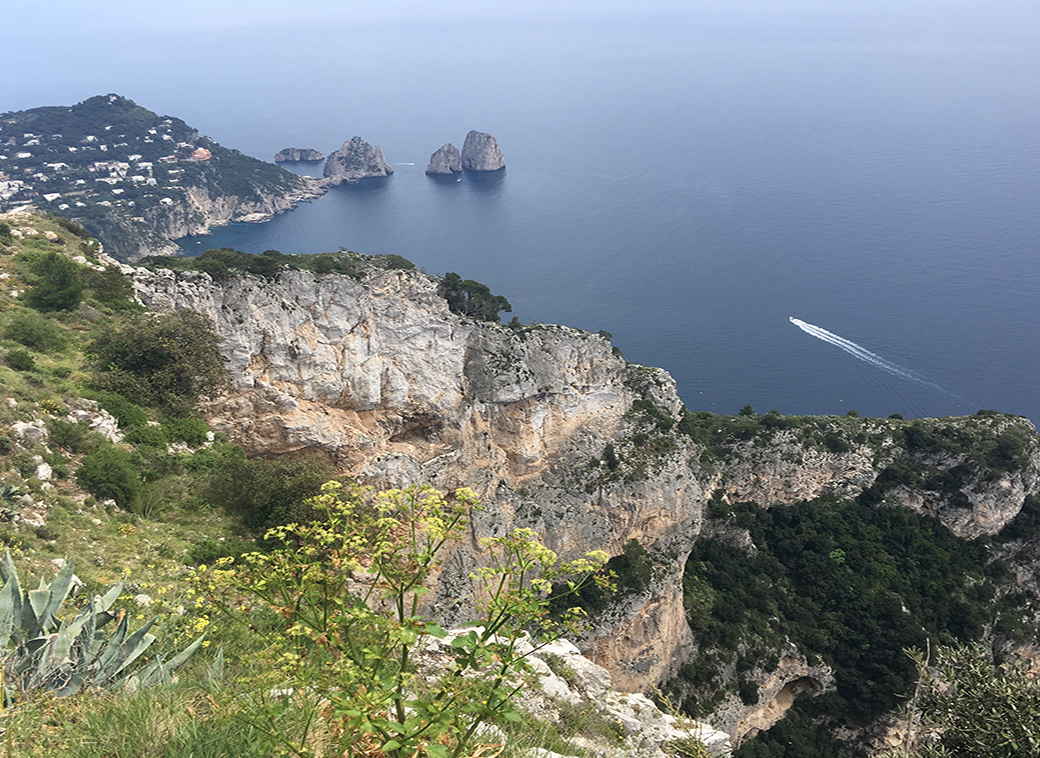 From Sorrento it is only a 20 minute boat ride over to the stunning island of Capri which is also a must! TIP 7. there are large open top taxis that are our recommended mode of transport here as great fun, no queuing (as the buses and funicular are always super busy, cramped and with little opportunity to see the sights) as you climb up to Anacapri, the high point with breathtaking viewing terraces! ! TIP 8. if you do want to take the funicular don’t just join the queue as the ticket office is on the other side of the road and along a bit – where you’ll need to buy a ticket first! TIP 9. don’t be put off by the final leg of the journey up to Anacapri which is the rickety looking single chair, ski lift type affair! It actually is fun, peaceful and an unusual way to arrive – we loved it! 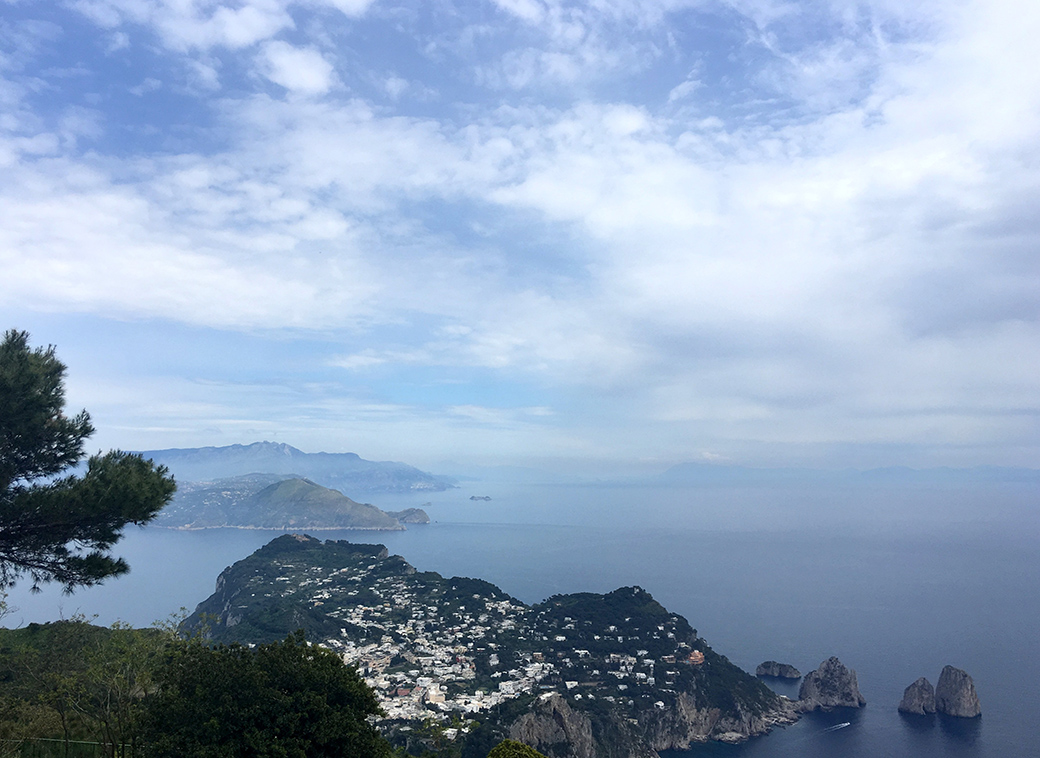 Whatever the weather or time of day you go up to Anacapri it’s worth it … dream like and heavenly are words that just don’t do it justice! We loved to see the boats and their wake adding to the scene … we were miles above the seagulls that were flying about, along the cliff edges below us which felt strange as they are usually way over head! The peacefulness and tranquility of the seascape was wonderful. 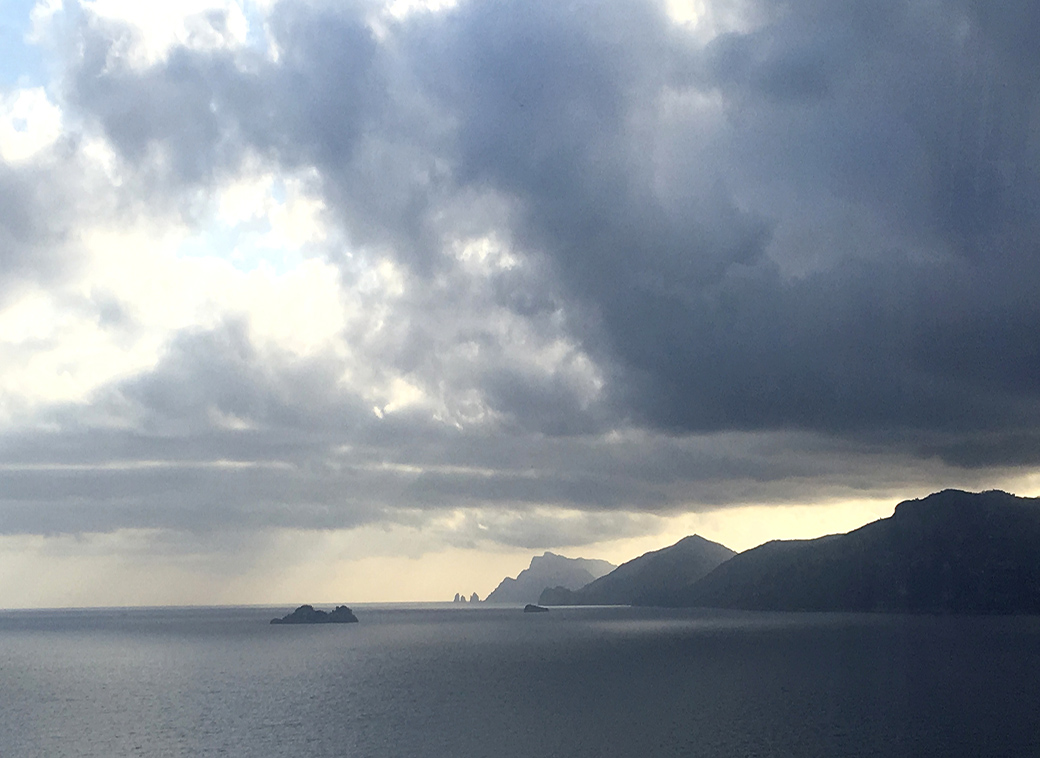 As dusk falls and the weather closes in the more dramatic becomes the outlook – just as striking though but in a totally different way – we were seduced by the stillness, the silhouettes, the force of nature, the sheer beauty! TIP 10. don’t be put off to go out of season as sometimes we’ve found it’s actually the better time to travel as crowds are low, we’ve been lucky with weather and there are deals to be had … places of beauty are such all year round! And if there is a shower and you get stuck for a while eating in a fabulous trattoria, not such a hardship we think!! 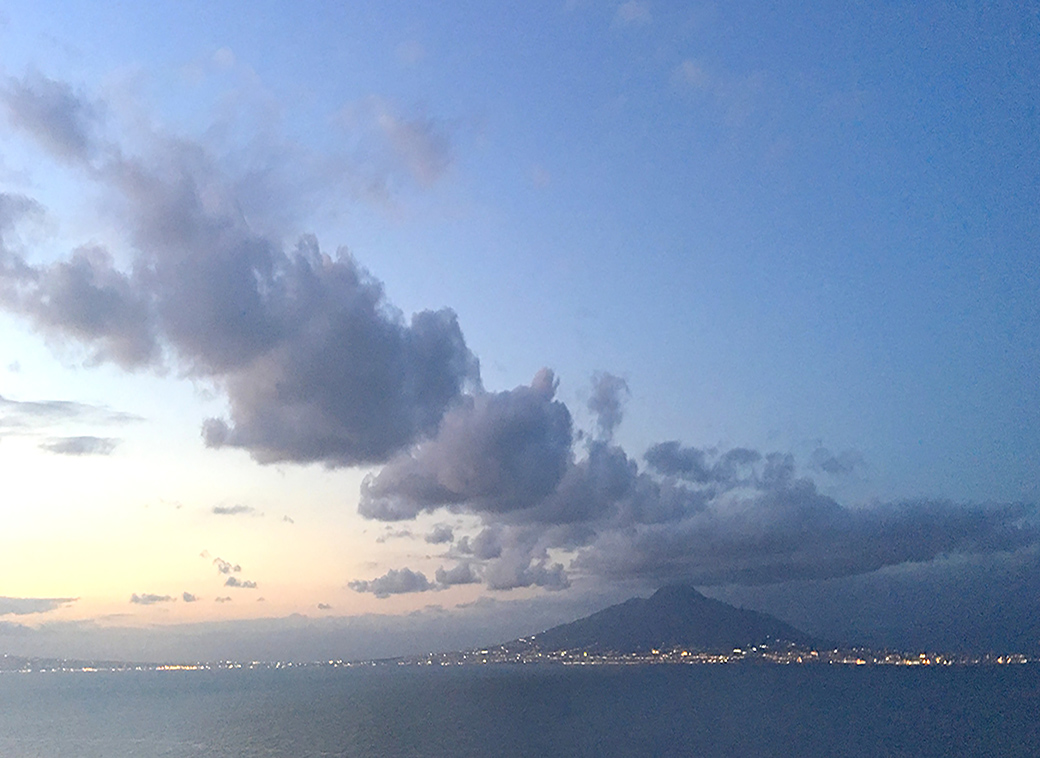 The Neapolitan volcano Vesuvius looms dark and large at all hours and can be seen from far and wide … by night it is softened by the bright lights of Naples, that is laid out from and around its base! And by day it is the back drop to playboys in their speedboats! There really is so much to see and discover along the Amalfi coast that one trip just is never long enough … even if you return time after time you will undoubtedly continue to be in awe of it – as are we! 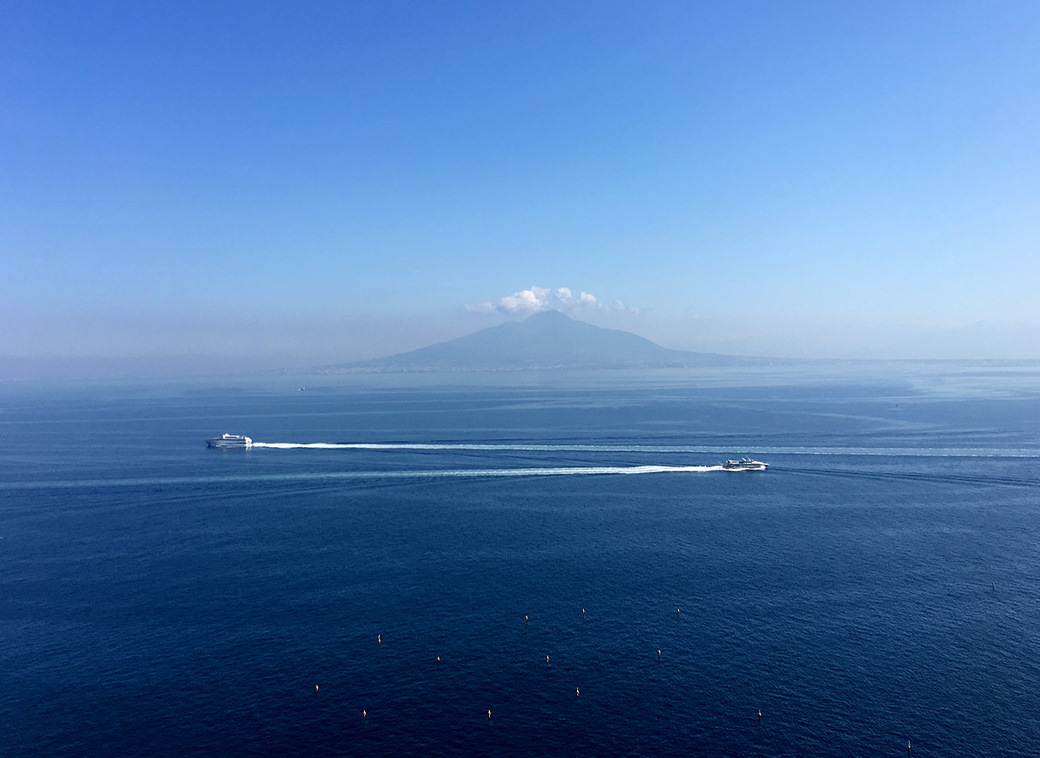 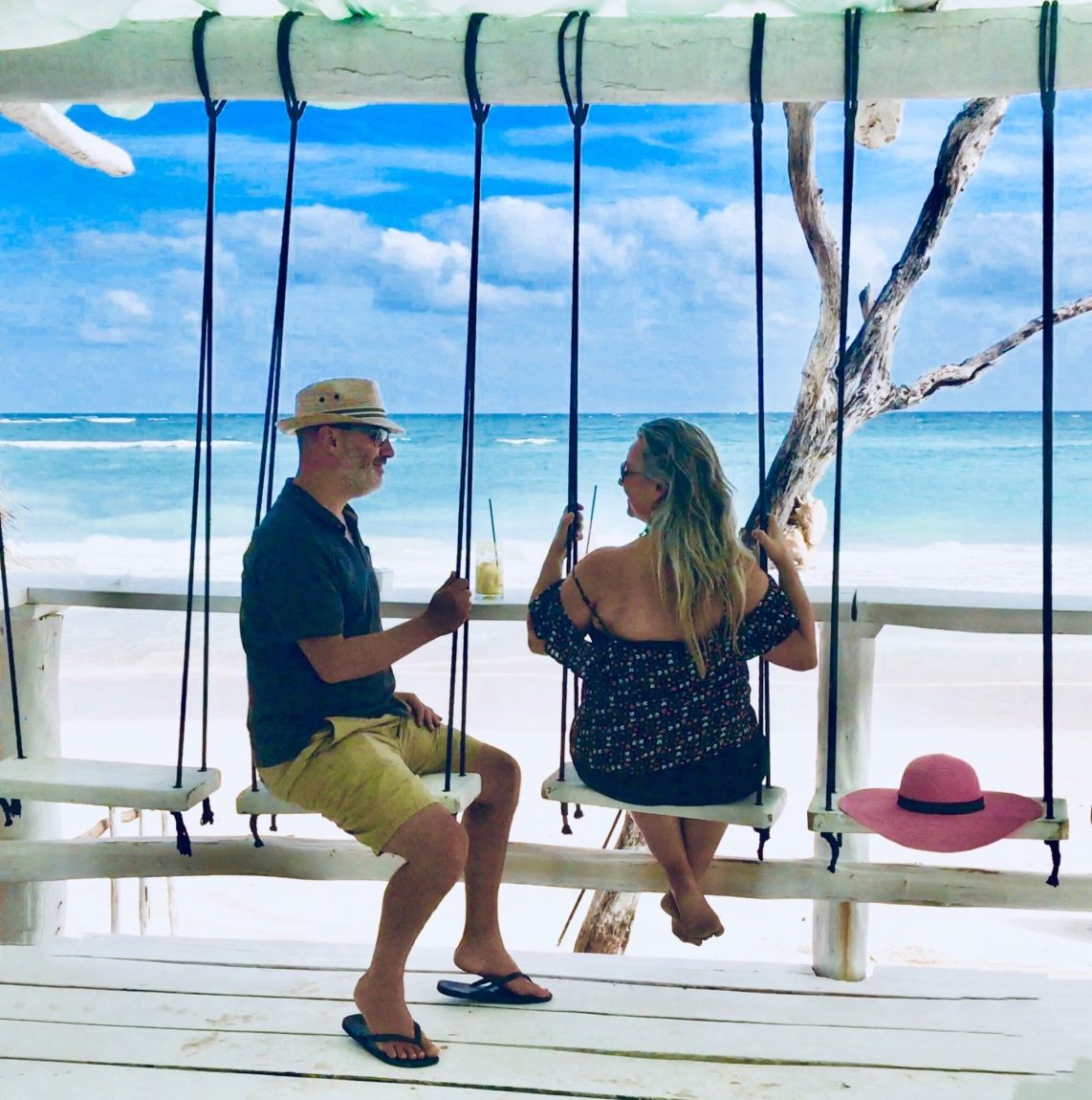